David is an Independent Researcher, previously a Senior Lecturer on the MMU BA (Hons) Film and Media Studies course. His subject specialisms are the Graphic Novel and the Comic Strip, Censorship, Hollywood Film and Animation. He is the author of Nasty Tales: Sex, Drugs and Rock n Roll in the Underground (1990) and Lone Heroes and the Myth of the American West in Comic Books, 1945-1962 (2018) and has written widely on American and British generic comics, and has written and illustrated a range of adult and children’s comics. He has supervised a wide range of PhDs in the fields of the graphic novel and the comic strip, horror, genre and national film and examined a wide range of Phds in film and media studies. He is the editor of the Journal of Graphic Novels and Comics (Routledge, 2010-).

Professor Murray’s research interests are in comics, film and popular culture, specifically the theorisation of how popular visual culture relates to other discourses (literature, art, and politics).

Chris has published on various aspects of comics, including:

Chris is editor (along with Dr Julia Round) of the peer-reviewed comics journal, Studies in Comics (Intellect Books).

He is Secretary of the Scottish Word and Image Group, which researches aspects of the relationship between verbal and visual representation. Julia’s research examines the intersections of Gothic, comics and children’s literature. Her books include Gothic for Girls: Misty and British Comics (UP Mississippi, 2019, winner of the Broken Frontier Award for Best Book on Comics), Gothic in Comics and Graphic Novels: A Critical Approach (McFarland, 2014), and the co-edited collection Real Lives Celebrity Stories (Bloomsbury, 2014). She is an Associate Professor at Bournemouth University, where she is also Deputy Head of the Narrative Culture and Community Research Centre and Programme Leader for the MA English and Literary Media course. She co-edits Studies in Comics journal (Intellect) and the book series Encapsulations (University of Nebraska Press), and is one of the organisers of the annual International Graphic Novel and Comics Conference (IGNCC). She shares her work at www.juliaround.com.

Roger Sabin is Professor of Popular Culture at the University of the Arts London. He has written several histories of comics, and was part of the team that put together the Marie Duval Archive. He is series editor for the booklist Palgrave Studies in Comics, and consults on curating (Tate Gallery, British Museum, British Library). The ‘Sabin Award’ is given yearly at the IGNCC. 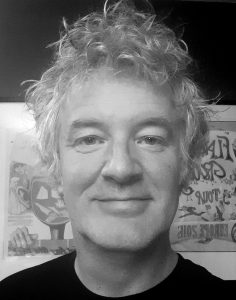 Michael Connerty teaches film and animation history at the National Film School, IADT, in Dublin, where he also co-chairs the Animation programme. He has published on mid-century Hollywood animation and Victorian comics. His monograph The Comic Strip Art of Jack B. Yeats was published by Palgrave Macmillan in 2021.

Join our Facebook group: International Conference of Graphic Novels and Comics for updates

University of the Arts London, 2020